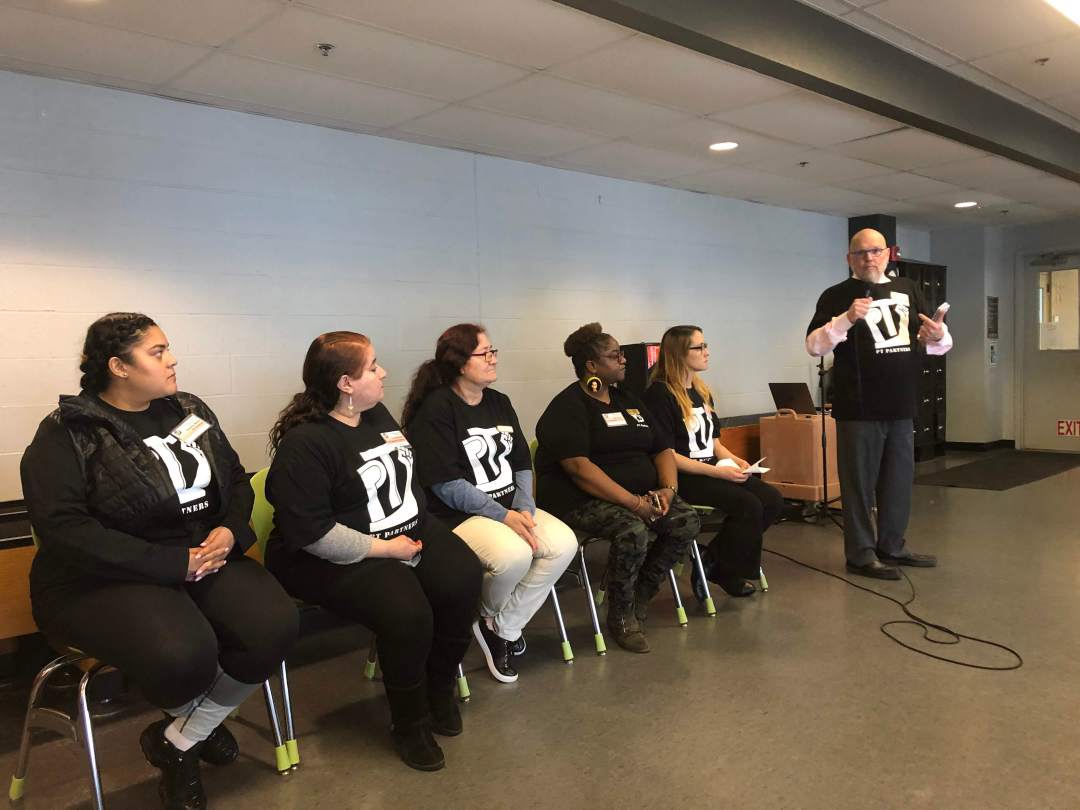 It’s been so long since I’ve written a blog post, but I’m putting this up to bring awareness to an important issue with ties to history in Bridgeport. On Feb. 27, 2020, I attended an information session hosted by PT Partners, a group of women advocating for themselves who live at the public housing complex known as PT Barnum Apartments in the West End of Bridgeport, CT.

The PT Barnum complex was built in 1950 and was later rehabbed, but it now has huge maintenance issues that are part of a much larger trend of neglect of public housing. There are so many issues that the residents face, both in where they live and what is zoned to surround them (mostly tons of industry including a trash incinerator and a sewage plant. Really).

The major current issue that I want to address here, though, is an important demand: community space. And this community space is a right, one guaranteed through HUD regulations, and won through public organizing after tragedy.

On Monday, April 27, 1970, an 8-year-old boy named Gary Crooks played with his friends outside near the P.T. Barnum Apartments. Gary lived with his parents, Mr. & Mrs. James Crooks, in Building 17. The playground was next to an open settling tank at the sewage plant, which was enclosed with barbed wire fencing that had been knocked over. Gary, his brother, and a third boy clambered up onto a cement wall that separated two settling tanks, enjoying the dare-devil tightrope walk in the brisk spring late-afternoon sun. And then Gary fell and struggled in the water, and then disappeared beneath the surface.

Recovery of Gary’s body took almost a full 24 hours. Firefighters were summoned and the plant began draining two million gallons of sewage water from three tanks. The same day that Gary’s body was removed, Rev. William O. Johnson of ABCD led a memorial service for the boy at the playground. About 300 people attended, speaking about security concerns with the sewage plant, which was then expanding. Residents of P.T. Barnum held a meeting that night to decide how to respond. At another rally, 800 hundred people marched to the same location.

Community group ABCD mobilized, along with the P.T. Barnum tenants’ association, Project OWN, and others, suing to stop the construction on the sewage plant. That Friday thousands of students joined a silent march as the boy was buried.

Here is a picture of P.T. Barnum residents and University of Bridgeport students marching to protest the situation that caused the death of Gary Crooks. 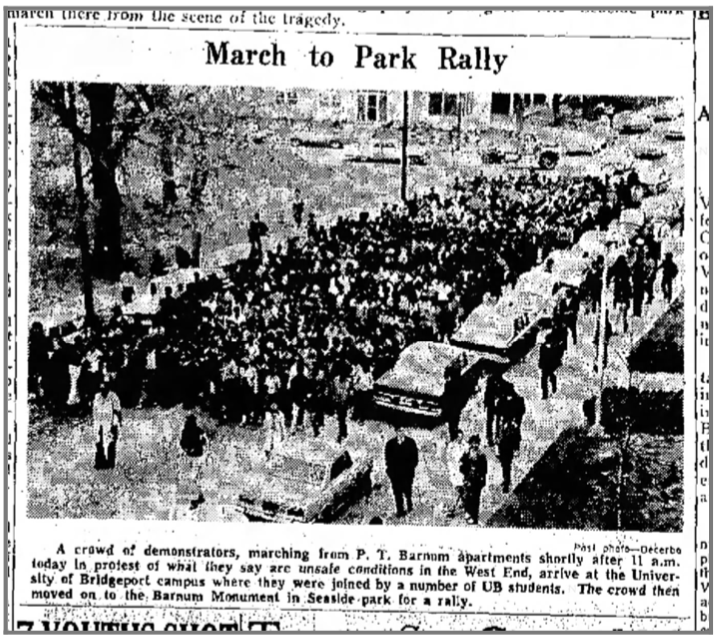 What the residents won, in the aftermath of Gary’s death, was access to nearby vacant factory building, which was funded as a community center. This was named the Gary Crooks Center, and since 1974 it has housed community groups and a vital community institution called the Cultural Arts Center, run by Action for Bridgeport Community Development. You can read more about the vital importance of the arts center for the children of PT Barnum and the whole city here. It was closed in 1986, a victim of Reagan-era funding cuts.

The ongoing activism at PT Barnum is part of a wave of organizing in public housing organizing in Bridgeport, including decades of activity at Father Panik Village on the East Side. It also includes a massive effort called Project OWN, which created a people-friendly plan for development of the whole West End. (more on that coming as I write about it).

Today, however, residents of PT Partners described a long series of struggles they have had in PT Barnum Apartments, one that has culminated in their being completely shut out of the community center that Bridgeport residents fought for in the 1970s. The organization had run a clothes closet and food pantry among other efforts out of the Crooks Center, and now they are not allowed to access the building at all.

Their other demands include:

What can you do?

You can contact Mr. Slaughter, the interim director of Park City Communities, which used to be called the Bridgeport Housing Authority, the entity funded by HUD that runs the public housing in Bridgeport. Ask him to give this community back their historic meeting and community space.

The activists of PT Partners also prepared this text to use in contacting the mayor’s office of Bridgeport, which you can use. Write to Office of the Mayor, City of Bridgeport, 999 Broad Street, Bridgeport, CT 06604. Or, if you’re a Bridgeport resident, you can contact your city council person directly.

In 1993, the Bridgeport City Council and City Hall Committee adopted a resolution regarding the Gary Crooks Memorial Center at 301 Bostwick Ave: (per the deed) “To maintain and use the premises for the purposes of providing health, recreational, and social programs for low and moderate-income residents.”

On December 30, 2019, at a meeting, the PCC Executive Director James Slaughter told Dione Dwyer, PT Resident Council President, that the Gary Crooks is an administrative building for PCC. He is correct because there are community-drive programs provided at Gary Crooks.

The residents of PT Barnum Apartments demand that the Gary Crooks Memorial Center return to its community roots as a neighborhood center with resident-driven programs and honor the legacy of Gary Crooks, his family, and the Black arts movement in Bridgeport. In addition, residents demand the removal of the rental and security fees for residents for use of the center, imposed by PCC.

If you are interested in supporting the activists of PT Partners, you can find them on Facebook at PT Partners here.

View all posts by sonyahuber